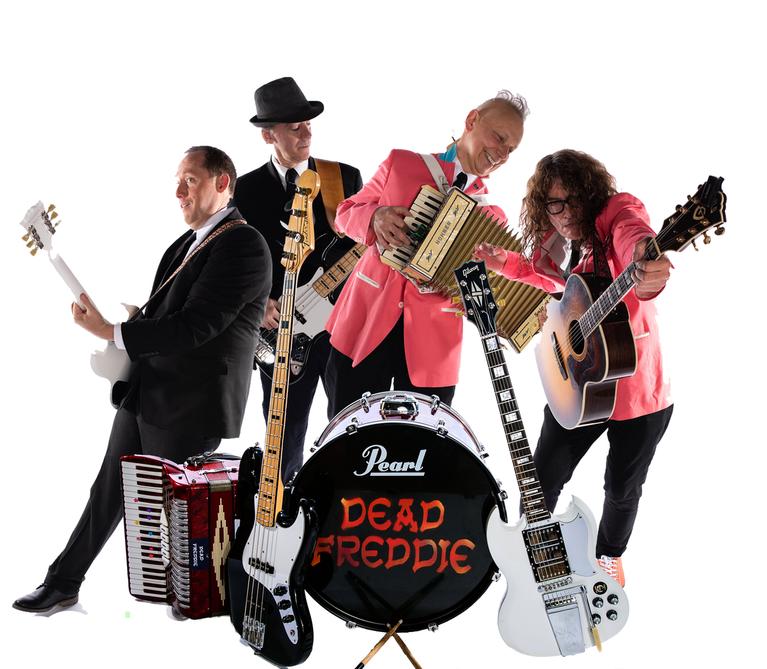 The current members of the band are Gintas Buinevicius on Drums, Guitar and Backing Vocals, Gary Vacha on Guitar, Karl Sperling on Bass Guitar, Sam Steagerman on Trombone and Donatas Ramanauskas on Lead Vocals and Accordion. The core of the group has been together since 2013.

The original line up, called Dead Freddie Band, formed in 1979 on the southwest side of Chicago.  The group played mainly original material, but was certainly influenced by the then new Punk movement, namely, the Sex Pistols, The Clash and The Ramones as well as by proto-punk artists such as Iggy Pop, Lou Reed, glam rock performers like the New York Dolls, David Bowie and Mott The Hoople plus some classic rock by The Who, The Rolling Stones, Led Zeppelin, The Beatles and Bruce Springsteen.  Finally, the excellent Power Pop groups of Chicago and the Midwest, such as Cheap Trick, Off Broadway USA, Skafish and Pezband, were also strong influences of the early Dead Freddie sound.  The original group disbanded in 1982, but the DNA of the original sound continues.

Donatas Ramanauskas remains from the original 1979 line up. Dead Freddie is the only band he has ever been in.  Gintas Buinevicius, who joined Dead Freddie in 2013, has previously played in various bands since the 1980's including Steak, Up, The Sloping of Water, The Ralleys and The Repeats.  He writes and performs solo material as Friends of the Moth and Saddleman, as well as the premier Beatles Polka Group, Sgt. Sauerkraut.  Karl Sperling, a multi-instrumentalist, who is also a regular member of Sgt. Sauerkraut's Polka Band, is the most recent addition to the line-up, coming on board in January 2020.  Gary "Vodka" Vacha has been a fixture on the Chicago music scene for decades, most recently as guitarist with Headspins, before that band folded and Gary joined Dead Freddie in late 2019.  Sam (Samantha) Steagerman provides an unmistakable sound with her horn, gathering experience mostly from high school and college marching band and orchestra stints, plus her love of Ska.  She has been with Dead Freddie since early 2019.

The first release by the group in November 2016 was a 6-track EP titled "If I Knew What I Wanted".  It contains classic tracks from the original 1979 material, plus three new original tracks by the current group.  It was recorded in Chicago at Bricktop Studio by sound engineer/producer Pete Grossmann and mastered by Trevor Sadler of Mastermind Productions.

The band's first full-length LP, self-titled "Dead Freddie", was released in November 2018.  It was recorded at Sonic Palace in Oak Park, IL by sound engineer/producer Matt Mercado and mastered by Trevor Sadler of Mastermind Productions, and pressed at the prestigious, THIRD MAN PRESSING, owned by Jack White (White Stripes) in Detroit Michigan!